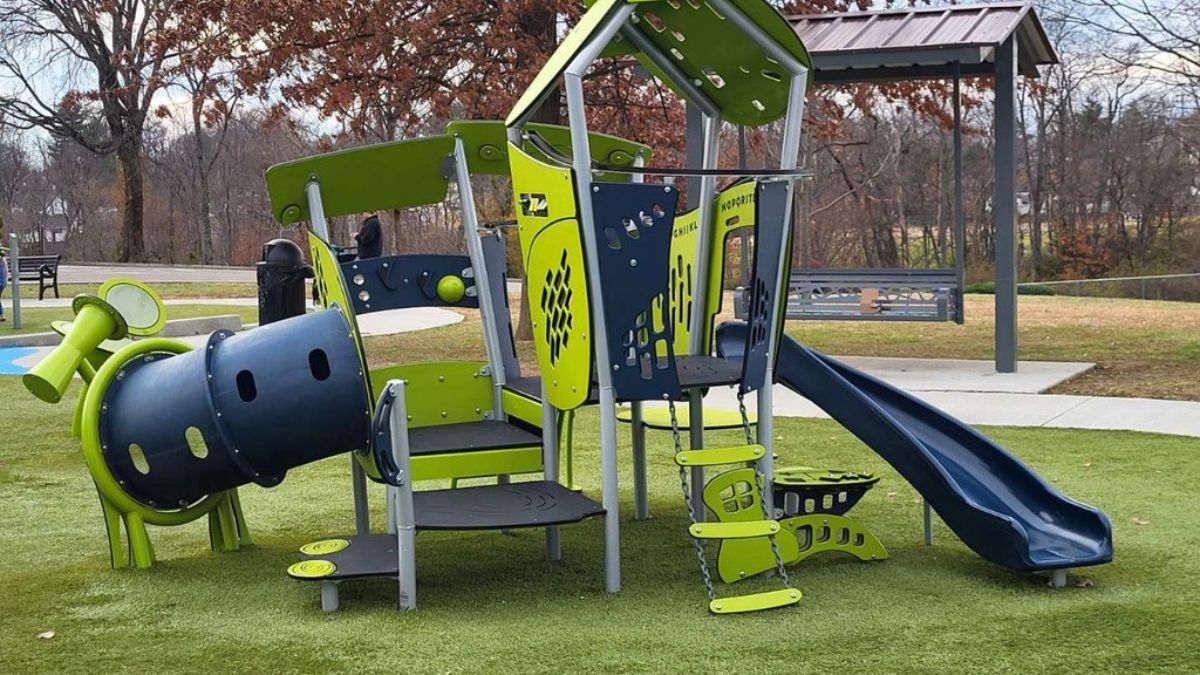 Delhi Township opened a new playground last spring and there are two notable things about it.

First, the new Delhi Park Playground was built to be accessible to all. And second, a new smoke-free resolution initiated by Delhi’s WeTHRIVE!℠ team and passed by Township trustees makes the playground, and all playgrounds in Delhi, safer for the young lungs playing there.

A playground built for everyone

“We had been in need of a new playground for a number of years,” explains Cheryl Sieve, township trustee and member of the Delhi Township WeTHRIVE! team. “And the biggest thing about this playground is that it is for children of all abilities.”

There are accessible swings, slides, and playhouses, and the ground itself is safer than what you find at other playgrounds. “It’s a formed rubber, which makes it bouncy,” Cheryl says. “And we have benches set around it where parents can sit and watch their children play.”

Smoking while kids play nearby

Those benches spurred a conversation at a Delhi Township WeTHRIVE! team meeting, as it was noticed that some parents and caregivers were smoking as they sat watching the kids play on the new playground.

“We had one of our tobacco health educators come to a meeting to discuss the dangers of secondhand smoke, even in outdoor areas,” says Nicole Key, population health specialist with Hamilton County Public Health. “She explained why it’s important to have a smoke-free policy and what it could look like for Delhi’s playgrounds.”

What caught Cheryl’s attention was learning that secondhand smoke can actually travel up to 30 feet.

Making a playground smoke-free involves more than just putting up a sign.

“To get it posted, it had to be in line with what was cited in the Ohio Revised Code,” says Doug Campbell, Delhi Township’s fire chief and member of the Delhi WeTHRIVE! team. “Assistant Police Chief Jeff Braun and Parks Director of Operations Randy Subee were instrumental in seeing that through.”

Cheryl adds, “It’s not as simple as flipping a sign that says no smoking. You have to really abide by what the Revised Code says. I’m really proud of the fact that parks, police, and fire came together to write these rules.”

Delhi Township trustees passed a resolution to approve the rules in early summer.

Although those who violate the smoke-free policy can be cited, Doug explains that education is the type of enforcement they are aiming for.

“It’s a ‘here’s the sign, here’s the rules, and don’t do it again’ type of thing,” he says. “You can come in with a heavy hand or you can educate folks – let them know that these are the rules and why we’ve implemented them and these are the consequences for not following the rules. I think the police department goes that route much more.”

The Township has a resource officer who is in the parks during busy hours. “His ability to point to the rule and say, ‘you’re out of order,’ is a nice plus for him for policing the area,” Cheryl adds.

Policy is a big accomplishment for WeTHRIVE! in Delhi team

Cheryl and Doug agree that the smoke-free policy would not have come about without the WeTHRIVE! in Delhi team.

“It was something that was done as a WeTHRIVE! team project, so to see it to it’s fulfillment, that’s nice,” Doug says. “I think it’s the first big accomplishment that has come out of the team.”

Advice to other WeTHRIVE! communities

Cheryl sees making the Delhi’s playgrounds smoke-free as something other communities can accomplish. “It’s a communication to the residents that we care,” she says of both building an accessible playground and making it smoke-free. “It shows that we’re there for their children, and there for the safety of their children.”

“Policy work like this takes time, but it is possible,” Nicole adds. “Everyone involved was supportive from the beginning. They recognized that this was a place where kids in the community were going to be playing and felt it was important as a first step to protecting their health and the health of the community as a whole.”