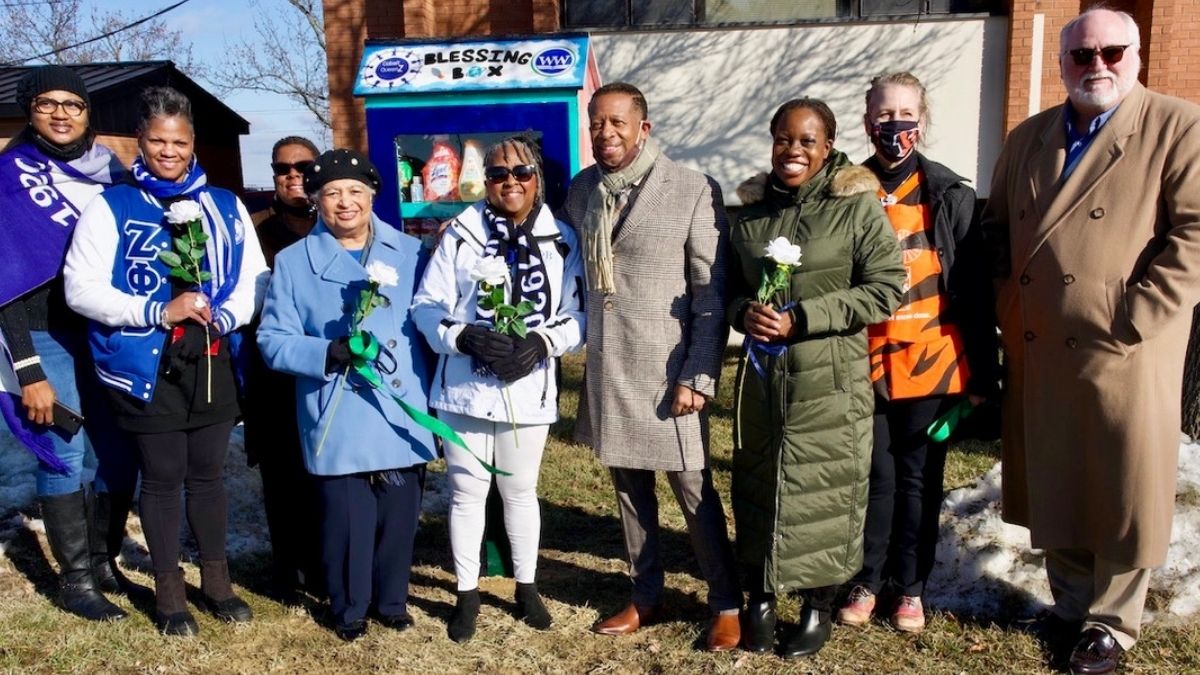 Forest Park held a ribbon-cutting ceremony on February 10 to mark the opening of the city’s first Blessing Box. This project was a year in the making and involved the kind of cooperation and collaboration that we so often see with WeTHRIVE!℠ in Forest Park.

What is a Blessing Box?

Blessing Boxes are mini-food pantries that operate on the ‘take what you need, leave what you can’ concept. They’re like Little Free Libraries, but instead of books, they hold non-perishable food, personal hygiene items, and cleaning products.

Blessing Boxes are a way for people in need to access food and other items anonymously, says Jermaine Hill, Forest Park assistant fire chief and a member of WeTHRIVE! in Forest Park.

“We want to remove all the barriers that keep them from asking for help,” he explained. “Having the Blessing Box allows people to come and go, to grab food as they wish. It also gives residents that chance to donate and give.”

Jermaine and Debra agree that getting things done in Forest Park is all about collaboration. “Forest Park is a very giving community,” Jermaine said. “Just like in years past, when there is a need identified, everybody steps up and offers something.”

For the Blessing Box to become a reality, it took the Cobalt Queenz, WeTHRIVE! in Forest Park, Home Depot, Winton Woods Schools (a WeTHRIVE! school district), the Forest Park fire department, and the public works department.

Jermaine says Home Depot has always been generous to the community. “When we contacted Home Depot, they offered to build the box for us free of charge. They didn’t even hesitate to do it, where a lot of other places would have.”

Winton Woods students painted the box as an art project. At the ribbon-cutting ceremony, Superintendent Anthony G. Smith said the students are planning designs for the next Blessing Box, which Home Depot has already built.

Forest Park’s public works department weather-proofed the box and got it into the ground despite the winter weather.

The Cobalt Queenz obtained the items needed to initially stock the box.

“One of our members, Marsha Watts, is a Forest Park community member who works with a Lincoln Heights church that has a food pantry,” Debra said. “She was able to get food items for the Blessing Box. Another member took care of getting personal care items through her work.”

The Blessing Box is located in front of the fire department at 1201 West Kemper Road. Staff will keep an eye on it, and if the box is full, people can leave donations at the station.

More than a box

“When some people think of a Black community, they often think of one that is impoverished and lacking resources,” Debra said. “The Blessing Box is an opportunity to reshape that narrative, to show that we have a caring community that wants to make sure that everyone has access to what they need to be successful, and that includes food and personal care items.”

“It’s been a phenomenal journey, getting the Blessing Box up,” Debra added. “It gives me a warm and fuzzy feeling to know that I live in a community that is willing to reach out and serve others.”